Tale of a Broken Nail


Jennie’s back with another short story that’s sure to get you… this time it’s all about a tale of a broken nail. Oh no!

We have all been there: a nail break…

Recently, I experienced a break of my own but it wasn’t just one nail. Oh no, it was three. Pointer, middle, and ring. Total and complete wreckage.

One crucial part about processing trauma is to share one’s story, so I present my reaction to the triple nail break in five acts, coincidentally the Five Stages of Grief. I’m sure this response is universal among NPAs 🙂

Cradling my hand like an injured bird, I scurry around the living room frantically searching for reading glasses to assess the damage.

It can’t be true. Don’t panic. Just find a pair of glasses. It’ll be fine. Maybe the nails are just bent at odd angles but can somehow snap back? Is that a thing that actually happens or just a cruel NPA urban myth? But even if they’re a little broken, they’ll be salvable with some tea bags, nail glue, and topcoat. It’s not like the universe would punish me with a simultaneous triple nail break, I mean, I was trying to open the door to fill the bird feeder so I’m basically an environmental warrior who would never deserve to be punished in such a harsh manner, right?

After finding my glasses to confirm all three nails were, indeed, broken below the skin line, I begin pacing like a wrestler readying to charge the ropes.

CURSE THAT DOOR HANDLE. WHY WAS IT WET? WHO DID IT? WHO CAUSED MY HAND TO SLIP RESULTING IN THIS TRIPLE BREAKAGE? WHO WISHED ME SUCH PAIN, SUCH AGONY? SHOW YOURSELF AND SUFFER MY WRATH. I WILL STAB YOU WITH THE SHARP REMAINS OF MY FORMERLY BEAUTIFUL ROUNDED SQUARE TIPS WHILE YOU GROVEL FOR FORGIVENESS THAT SHALL NEVER BE GRANTED. A CURSE ON THIS HOUSE. A CURSE I TELL YOU.

I take a meditative breath after the surge of fury passes, then conduct a second reassessment of the shattered trio.

I guess there’s a chance I’m overreacting. It’ll be okay. I had a previous terrible break two summers ago and press-on nails disguised the damage pretty well. Sure, I could only paint two designs before the acetone would create canaverous holes rendering them useless, and there were only two nails per package that fit my enormous nail beds—a whopping $5 per nail—but that’s all right. I’ll apply nail treatment religiously to speed up growth…WAIT! What if I don’t buy more polish for the month, like a sacrifice to the nail gods for swift regrowth? Yes! That’ll work! Now what else can I sacrifice? Something meaningful. The more it hurts, the better. This idea is fool proof!!

I pour beloved lineal holographic onto work surface, whispering a prayer of hope for hasty cellular regeneration to nail gods pictured like the cast of Claws.

Now slumped at my nail station, I stare forlornly into the bleak horizon of my future.

A nail polish buy ban and sacrifice of beloved colours was a ridiculous idea. There aren’t any nail gods. If there were, such breaks would never occur. What a waste of holo nail polish. No sacrifice will speed up their growth. It’ll take at least two months before they return to their usual length. One month of un-paintable ugliness followed by a month of stubbies. Goodbye cuffs and outlines—designs that would only amplify their short and stumpy length. I’ll just take down my nail polish rack and store it in the garage so I don’t have to look at it every day. And also delete my Instagram. What’s the point? Nobody wants to see this disaster.

With a heavy heart, I remove the remaining jagged pieces and file to avoid further damage via snags.

Okay, this situation isn’t ideal but what, I’m just supposed to give up? Of course not! I mean, a triple nail break is no joke, but thank goodness it’s my Cinderella hand. What a miracle! This could legitimately been a hundred times worse, so maybe the universe doesn’t hate me after all. One-handed manis can work for Instagram. And hey, stubbies aren’t the worst. In a couple of weeks, I’ll break out the darker colours. Shorter nails look great in those.

Feeling more optimistic about my nail future, I use an oven mitt to protect remaining intact nails, open the door, and finally fill the bird feeder.

Shop the best nail paint for your nails.

A little more about your Picture Polish Writer…

Jennie Shaw is a writer, book reviewer, and ardent nail polish enthusiast. She lives in the Canadian countryside with her husband and a pair of senior pups, and spends a shocking amount of time thinking about what to eat for supper.

Check out Jennie’s blog Nails and Tales for her mix of books and nail polish.

Thank you for sharing your story Jennie.  The Girls xox 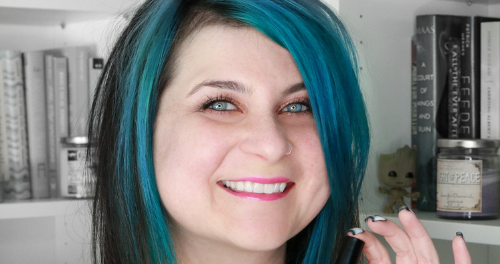